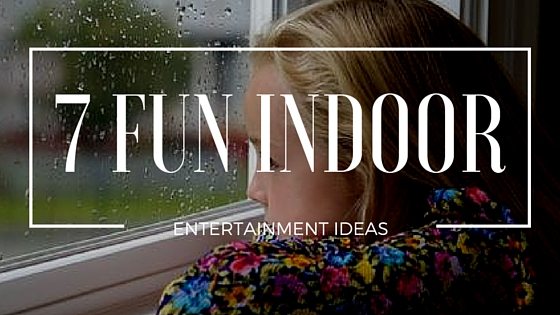 It’s a rainy Florida day, and you’re stuck at home. You already spent some time reading online and watching TV. It’s only three o’clock in the afternoon, and you’re really bored. Luckily, you have a few friends coming over. Spending time with your friends is much better than sitting at home alone…But what if they’ll also get bored and seek some action? In this case, you should be ready to save the day. To help you out, here are seven indoor entertainment ideas you can put into action.

To play this game, make a list of five actresses and five actors, and give each player a pen and a piece of paper. Say the name of an actor or actress and ask your friends to write down as many movies as they can remember the actor/actress played in. Each correct answer is awarded one point; the player with the highest score wins.

One of the most popular indoor entertainment ideas is to play Charades. Divide your friends into two teams. One team will choose a “target” word/phrase (e.g. a movie or book title) that belongs to a pre-established category. Then, a person from the other team needs to convey the word/phrase to his teammates, who must guess what it is in a limited period of time. The player may use only his gestures to describe the word/phrase.

If you feel like building something, get a stack of old newspapers and two rolls of masking tape. Divide your friends into two equal groups. Each group has ten minutes to build a tower, using only the newspapers and masking tape. After the game is over, the towers must stand for at least one minute.

Playing Pictionary is another great indoor entertainment idea. If you aren’t good at drawing, don’t get discouraged. This game is even more fun when people can’t draw. When both teams won’t be able to decipher whether what you’re drawing is a bird or a camel, there will be loads of laughter.

There are a few great card games you can choose from, such as Egyptian War, Spoons and Spades. If there are four players, you should definitely choose Spades. Why? Because playing with a partner always adds more excitement to the game.

A few classic board games you can play with your friends are Monopoly, Rummikub, Scrabble and Yahtzee. You may also want to try some of the new, exciting board games, such as The Voyages of Marco Polo, Sheriff of Nottingham, Quantum, Myth, Star Realms and Camel Up.

…at home? Yes. Search online for printable bingo cards and print as many as you think you need. You can replace the bingo balls with 75 small pieces of paper, write numbers and letters on them, and fold them in half two times. Place them in a bucket, then designate a person to select one piece of paper at a time and read the letters, numbers or letter-number combinations. The goal of each player is to cover five squares in a horizontal, vertical or diagonal row.

Oh, we almost forgot to tell you something extremely important: any of these games go very well with pizza.

Well, that’s about it! We do hope that our suggestions have given you a few great indoor entertainment ideas to pass the time and have fun on a Florida rainy day.